The Trial Deck+, Booster Pack and Supply Set for The Seven Deadly Sins are set to hit your LGS’ shelves on July 30th, 2021! The pre-order period for this set is now on, so if you haven’t place your orders yet, there’s still time!

In this article, we’ll continue to reveal a few more cards that feature memorable scenes from the anime!

A pairing of the extremes! Here comes the Serpent’s Sin of Envy, Diane and the Grizzly’s Sin of Sloth, King!

Diane: Cheerful is a powerful Level 3 card that can be played early at Level 2. 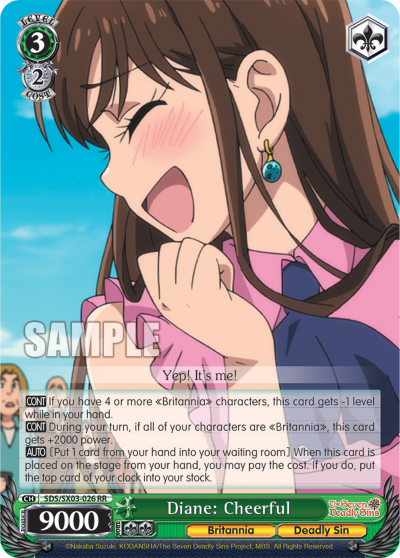 Being able to come onto the field and land a blow with 11000 power, Diane can take out obstacles during mid-game. In addition, discarding a card to heal a card from your clock to your stock, helps to stash up stock, which will come in handy for Diane: Wielder of Gideon in late-game.

Diane: Wielder of Gideon is another Level 3 card that works awesome as a disrupter to your opponent’s deck.

For starters, she is capable of reaching 12000 power without any support from the back stage, as she gains 1000 power when your other 《Britannia》 character attacks.

At the same time, you can pay 1 stock to put all stock from your opponent’s stock into their waiting room, and put the same number of cards from the top of their deck back into their stock.

If your opponent has a healthy stock count and a deck full of climaxes, turn the tide by putting them all to your opponent’s stock instead!

With this great disruption effect, she’s the perfect partner for King: Wielder of Chastiefol! 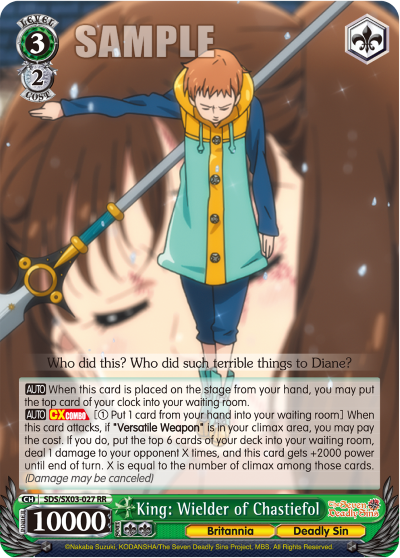 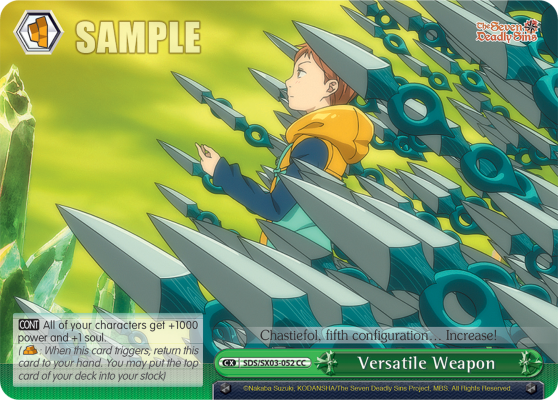 The Fairy King Harlequin fights to protect the girl he loves, and King: Wielder of Chastiefol is a testimony to that, as he joins the fray with intent to kill those who dares to hurt her!

When this card attacks, you can pay the cost to activate his Climax ability. With it, you can put the top 6 cards of your deck into your waiting room and for each climax card revealed, you get to deal 1 damage to your opponent while gaining 2000 power in the process!

Unleash the fifth form of Chastiefol, “Increase” and rain damage onto your opponent!

Playing Diane: Wielder of Gideon on the same turn can cause a ton of damage to your opponent by not only disrupting the climax-within-deck ratio, but also deal up to 8 instances of damage with just Diane and King!

This may sound great but by milling out your own deck, you can be put in a perilous situation as well, just like how Chastiefol taxes greatly on its wielder. Be sure to catch the right opportunity, or it may become your own demise instead!

Dealing that numerous times of damage sounds crazy, but like King, we’ll have to try our best and do the impossible…

We still have a ton of cards left to unveil for The Seven Deadly Sins, so do look out for more articles like these in the weeks to come!

Pre-orders for this set are now on till 30th April 2021, approach your FLGS to place yours today!