【Adventure Time Card Reveals】You know what time it is?

Trial Deck+, Booster Pack & Supply Set products for English Original title Adventure Time is set to hit your FLGS’s shelves on November 20th, 2020! Preorders are closing soon (at the posting of this article – today!) so hit your FLGS up if you’re interested!

What? Still unconvinced? Maybe this will sway you…!

With Jake the Dog and Finn the Human, the fun will never end!

The inseparable fun-loving, adventure-seeking duo rarely have a dull day together, and it’s not hard to see why! We knew there had to be a level 3 card featuring the adoptive brothers together, and we knew the card had to be strong, so- 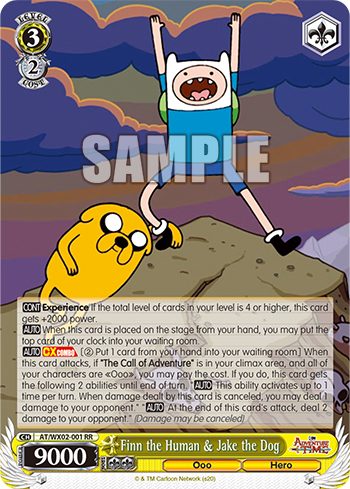 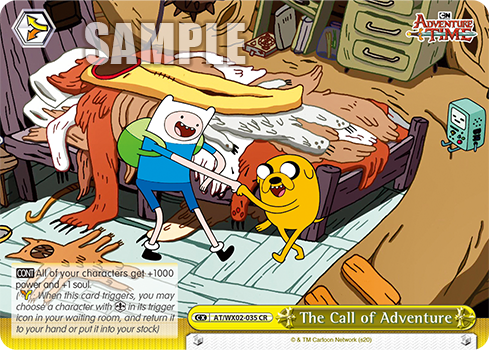 Right off the bat, their first and second abilities are pretty decent. A basic heal ability, and a neat CONT that dials their power up to 11 (thousand). Heal is always good to have on level 3 cards to extend your game a little, and the power boost is a nice touch!

The CX Combo ability is where it’s at, though – as I’m sure everyone will agree!

At the cost of 2 stock and 1 hand card, this card gains not one, but two abilities that can deal effect damage to the opponent – a “Shot” effect where the opponent takes damage if they cancel damage dealt by this card, and a deal 2 at the end of the battle!

Sticking large amounts of damage without some kind of “shuffle back” ability gets progressively more difficult as decks get thinner in the late game, so dealing small chunks of damage is often preferable! In an ideal situation, you’d be swinging for 3 soul damage, which will be complemented by the deal 2 damage at the end of the battle, and at any of these points, if damage is cancelled, you can deal 1 damage to the opponent – meaning you have up to 3 opportunities to deal damage to your opponent! If they don’t cancel anything, you’re sticking 5 damage in at least – almost a whole level by itself!

Another advantage of this ability is that it doesn’t require you to reverse the opponent for it to fire off, so you could even be running them into walls to fire the effect off! The second CX Combo ability to deal 2 damage will still fire off even if this card is in Reverse as well! Just watch out for decks that can remove them from the field, and you’ll be home free!

Come Away With Me

And that’s it for the special Adventure Time card reveals! We hope you’ve enjoyed the cards we’ve shown, and that you’ll enjoy playing with this set once it drops on November 20!