Last week, we talked a little bit about Finn and the prized swords he swings on his many adventures, but today we have something very different in mind…!

A dimension of chaos 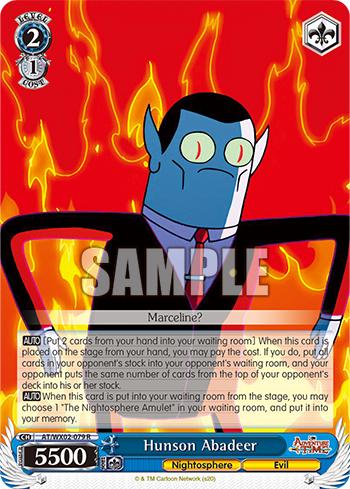 His first ability exemplifies “chaos” indeed – washing out your opponent’s stock and filling it with cards from the top of their deck! A familiar effect that veteran players will be familiar with to be sure, but it perfectly captures the essence of the Nightosphere and Abadeer’s place in it!

In this article, though, we’ll be focusing on its second ability a little more: Hunson Abadeer is able to place a card called the “The Nightosphere Amulet” from the waiting room into your memory when it’s sent to the waiting room from the stage.

A ghastly artifact that turns its wearer into a demon, the amulet is also the source of Abadeer’s vast power. 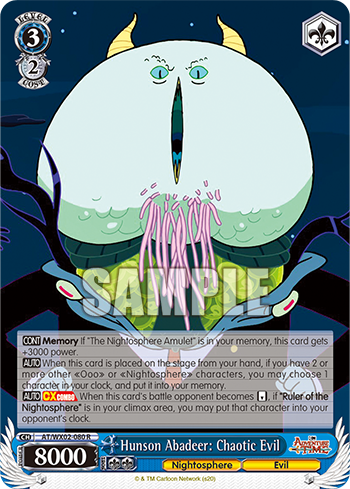 Abadeer’s true demonic form is frightening indeed! Although it only comes at level 3, you get to heal a damage to your memory, where it will stay until the end of the game – perfect if you’re about to refresh, since the card doesn’t get shuffled back to the deck! Its climax combo ability even allows you to kick the reversed opposing character straight into the opponent’s clock for no cost!

We see again a reference to this dastardly card “The Nightosphere Amulet” here! What on earth does it do, you ask? 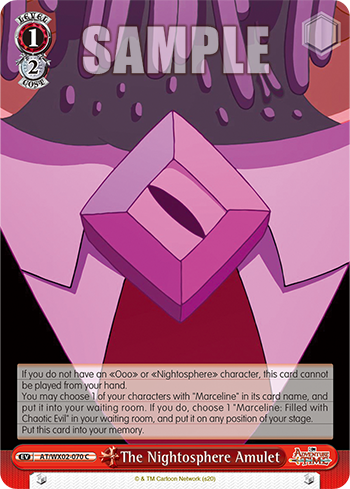 Marceline is tricked into wearing the amulet by Abadeer in one of the episodes, and she takes on a much more sinister form. To showcase this memorable episode, the amulet works in much the same way and unleashes the darker side of our beloved vampire queen. 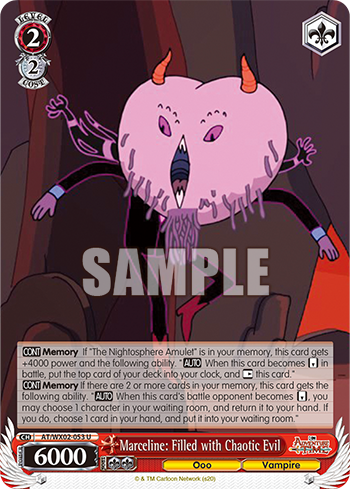 10000 power with a forced encore effect means your opponent has to either run smaller characters into this, ignore this column, or invest some kind of field removal card (clock kick, bounce, kick to memory) – not particularly fun choices by any measure! With her second ability, you even get to sculpt your hand for the next few turns!

The key idea for this set of cards is to be able to get “Marceline: Filled with Chaotic Evil” out onto the field early with “The Nightosphere Amulet”, where it will likely sit there for a good few turns to accrue advantage! If you can’t get this setup, “Hunson Abadeer” will help you set up for a crushing Level 3 game by empowering “Hunson Abadeer: Chaotic Evil” instead!

Thanks for tuning in again this week guys! Stay tuned for more reveals next week!