Meisters, the wait is almost over – the Trial Deck+, Booster Pack & Supply Set products for the English Original title Adventure Time has been confirmed for release on November 20th, 2020!

As the release date approaches, we’d like to drum up the hype a little the best way we know how – with brand new card reveals!

An adventurer and his trusty blade!

The land of Ooo, where the protagonist Finn is from, is as wondrously dangerous as it is vibrantly colorful, with all manner of weird and wonderful creatures abound! As a seasoned adventurer, Finn knows better than to leave his tree home unarmed, so he always straps his weapon of choice to his backpack before he sets off! 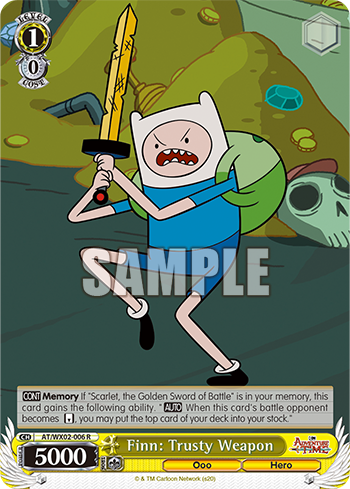 A simple effect to be sure, but one that will definitely help you later on in the game! This card cannot be assessed by itself, though, so let’s take a look at… 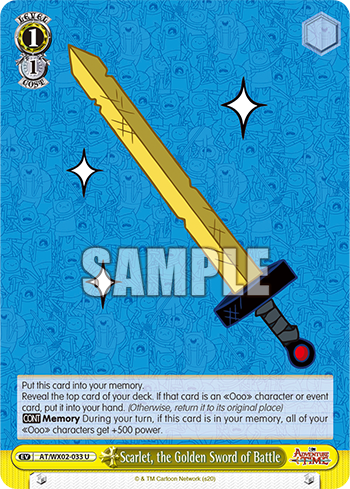 For the cost of 1 stock, Scarlet, the Golden Sword of Battle thins your deck by placing itself into your memory, where it will then provide +500 power to all your Ooo characters on your turn. It might seem like somewhat of a steep cost, but there is a chance that it will replace itself with the second effect, which helps balance things out a little! Finn: Trusty Weapon does give you 1 stock if you reverse an opponent in battle while this is in the memory so in a way, the event is paid for when these cards are used in tandem. The gain in power will also help you overcome any walls that your opponent plays out, which can help snowball your advantage!

And Finn is no different! Finn gets periodic upgrades in his equipment, and one of the first upgrades he receives is from his foster father, Joshua! 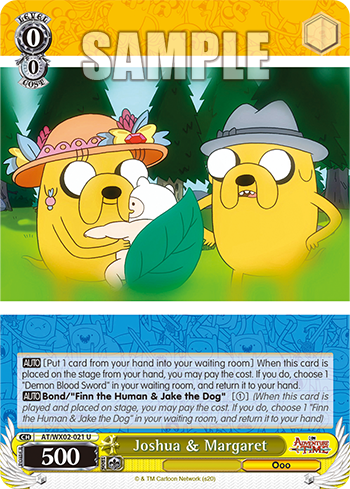 Joshua sends Finn on a quest to retrieve this weapon, and our protagonist rises to the occasion in spectacular fashion! Tying in to that, this card featuring Finn’s foster parents (and Jake’s actual parents) allows players to swap a card from their hand for the Demon Blood Sword in the waiting room! It also has a Bond ability that retrieves another card, but we’ll leave that for another day 😉 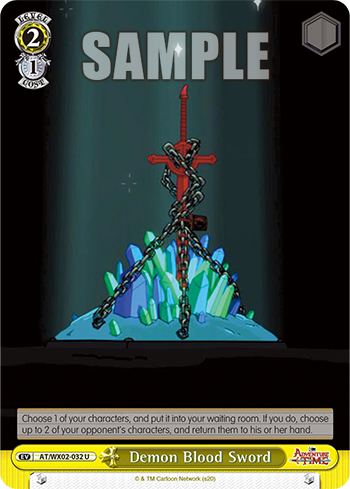 While the cost for this event does come off as fairly steep, being able to return 2 cards to your opponent’s hand can be extremely powerful indeed, especially since there are no other restrictions on what characters you can choose! To get the most out of this, try using a level 0 character that you no longer need as fodder, and choose opposing characters with 1-2 stock cost!

We hope you enjoyed this week’s reveals! Articles will be released once a week for the next four weeks, so do stay tuned for new articles coming your way! Adventure Time is also available for pre-order again, so do approach your local game stores to pick yours up today!