Welcome back to the Weiss Schwarz Weekly Column!

In the past week, we had successfully held Bushiroad World Championship 2015 in 3 different locations: United Kingdom(Manchester), Singapore and Philippines(Manila).
The winning titles are Puella Magi Madoka Magica in United Kingdom and Love Live! in Philippines!
Be sure to check out the Top 3 deck lists HERE.

I am super excited to welcome LOG HORIZON Trial Deck and Extra Booster to the English Edition Weiss Schwarz this weekend! For this week’s article, I will be doing a quick introduction on this exciting set.
Are you ready to begin your adventure with LOG HORIZON? Here we go! 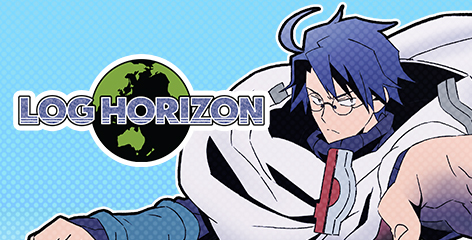 Unlike other sets, LOG HORIZON Trial Deck and Extra Booster contains only Red and Blue cards. Despite the relatively small pool of cards, this set is sufficient to create an all-rounded deck to compete in the current environment.

While Bushiroad World Championship 2015 is still ongoing, it would not be surprising if a LOG HORIZON deck finishes in the Top 3.
Let’s begin the set introduction with a few unique abilities featured in LOG HORIZON Extra Booster.

When a Climax card with a Gate Icon is triggered, player can choose 1 Climax card from his or her waiting room and return it to the owner’s hand.

With this trigger effect, you will have a higher chance to retrieve the correct Climax card that you need for your combos. 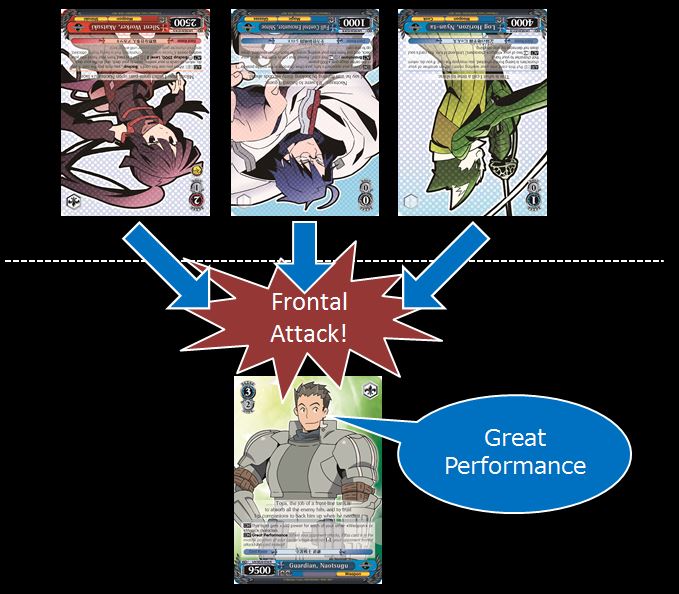 The Great Performance states that When your opponent attacks, if this card is in the middle position of your center stage and not [Reversed], your opponent frontal attack this card instead.

This helps to protect key characters on the field from attacks, allowing the player to retain a field advantage. Use Backups and Counters to power them up to improve their survivability!

If you think that Level 3 supportive character is new, you probably missed out onGirl Charmed By a Cat, Tsubasa Hanekawa. Log Horizon’s Representative, Shiroe has a set of powerful abilities. Let’s take a closer look at them.

【CONT】 You cannot take damage from your opponent character’s 【AUTO】 effects.
This ability counters against abilities of cards such as Conclusion After Wearing! Ryuko very well. It might simply be the key to take down your opponent’s key Character card and strategy.

【CONT】 Assist All of your 《Weapon》 or 《Magic》 characters in front of this card get +X power. X is equal to 1000 multiplied by that character’s level.
While this ability does not benefit Level 0 characters, it can provide up to a 3000 power boost for Level 3 Character cards. It works on both players’ turn, so do not underestimate this ability.

【AUTO】 [(1) 【REST】 this card] During your turn, when another of your character’s battle opponent becomes 【REVERSE】, if this card is 【STAND】, you may pay the cost. If you do, choose one of your characters in battle, and that character gets the following ability until the end of your opponent’s next turn. “【CONT】 The character facing this card gets -2 soul.”
There is no special requirement for the level of the battle opponent 【REVERSE】, you might be able to catch your opponent off-guard if they decide to leave a Level 0 character in the center stage. Giving your opponent’s character -2 soul bolsters your defense, so plan your strategy well to pull off this ability often.

Next, we will look at the ace attacker for this set, Lord’s Ninja, Akatsuki. This card’s abilities are simple and straight forward. Let’s go through it one by one.

【CONT】 This card cannot side attack.
A negative ability but should not be too much of an issue.

【AUTO】 When this card is placed on the stage from your hand or by a “Change” effect, you may put the top card of your clock into your waiting room.
Cards with healing ability are always welcomed! The best thing about this card is that you are able to use the “Change” ability to play it at Level 2.

【AUTO】 When this card attacks, if a card named “Waltz for Two” is in your climax area, until end of turn, this card gets +4000 power and the following ability. “【AUTO】 When this card’s battle opponent becomes 【REVERSE】, you may deal one damage to your opponent.”(This damage may be canceled)
A climax combo that gives power boost and damage dealing ability.

Now that we have looked at some of the key cards of the set, here is a sample deck for you to test it out!