Welcome to a brand new article on the Weiss Schwarz Weekly Column!

With the new release of THE IDOLM@STER CINDERELLA GIRLS trial deck and booster pack, we can expect some shift of deck choices in the upcoming Weiss Schwarz Neo Showdown at Bushiroad Spring Fest 2016. Don’t forget to check out the winner’s deck recipe from the event too.

Today, we will be previewing a couple of cards from the upcoming Fate/stay night [Unlimited Blade Works] Vol.2 Booster Pack. Firstly, let’s take a look at “Caladbolg Ⅱ”. 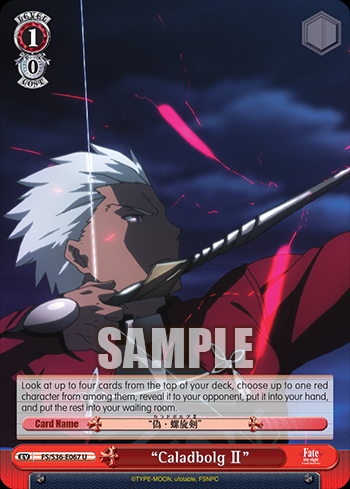 Look at up to four cards from the top of your deck, choose up to one red character from among them, reveal it to your opponent, put it into your hand, and put the rest into your waiting room.

“Caladbolg Ⅱ” is an event card from Fate/stay night [Unlimited Blade Works] Vol.2 Booster Pack. It is a Level 1 event card that allows you to get a red character card from the top 4 cards of your deck. It does not require any stock to use, so I would say it is a pretty useful 1-for-1 utility event card.

This card looks normal but other cards that synergize with it means that you essentially have to include 4 copies in your deck. Before we begin looking at cards that combo with it, here is a quick recap on what the “Resonate” ability does.

Resonate is a collective keyword for an ability which contains the cost to “reveal a specified card in hand”. This simply means that having specific cards in your hand will greatly impact your game. Let’s take a look at some cards that resonates with “Caladbolg Ⅱ”.

【AUTO】 When this card is placed on the stage from your hand, choose one of your characters, and that character gets +1000 power until end of turn.

This ability will always come in handy no matter which stage of the game you are in.


【AUTO】 Resonate [Reveal a card named “”Caladbolg Ⅱ”” in your hand] At the beginning of your climax phase, if this card is in your center stage, you may pay the cost. If you do, choose a level 0 or lower character in your opponent’s center stage, and put it into his or her waiting room.

Send an opponent’s Level 0 card to the waiting room by simply revealing a card in your hand. It’s pretty useful when you want to get rid of powerful Level 0s in the early game.

It is a little different than your usual Encore ability which requires you to discard a character card, but hey, if you are playing a mono-red deck, your climax and event cards will be more useful!


【AUTO】 Resonate [Reveal a card named ““Caladbolg Ⅱ”” in your hand] When this card becomes 【REVERSE】, if the level of this card’s battle opponent is higher than your opponent’s level, you may pay the cost. If you do, 【REVERSE】 that battle opponent.

Your opponent might have to think twice before attacking this character with a character that entered via Change abhility. In some scenarios, you can even use this Resonate ability to reverse your opponent’s character, then discard “Caladbolg Ⅱ” to [Encore] Rin. Sounds pretty efficient, doesn’t it?

【CONT】Assist All of your characters in front of this card get +500 power.

Basic ability for a Level 0 support.


【AUTO】 Resonate [(1) Reveal a card named “”Caladbolg Ⅱ”” in your hand] At the beginning of your climax phase, you may pay the cost. If you do, choose a card named ““Lord and Retainer” Rin & Archer” in your waiting room, and return it to your hand.

Paying 1 cost to retrieve a Level 3 character is really awesome! In case you are wondering what “Lord and Retainer” Rin & Archer does, it’s the next card that we are going to preview below.

【AUTO】 When this card is placed on the stage from your hand, you may put the top card of your clock into your waiting room.

Don’t we all love Level 3 characters with healing ability?


【AUTO】 [(1)] When this card attacks, if a card named “Last Words” is in your climax area, you may pay the cost. If you do, deal one damage to your opponent, and this card gets +3000 power until end of turn. (This damage may be canceled)

Power boost and damage dealing ability are both things that you need to during the later stage of the game, so I would say this card is pretty essential to the deck!

【AUTO】 [(1)] When this card is placed on the stage from your hand, you may pay the cost. If you do, choose a card named “”Caladbolg Ⅱ”” in your waiting room, and return it to your hand.

There are always situations where you need to get that “Caladbolg Ⅱ” in your waiting room back to your hand. This card is here to save you from that situation.


【ACT】 [【REST】 two of your 《Master》 or 《Servant》 characters] Choose one of your characters, and that character gets +2000 power until end of turn.

【REST】-ing your characters in the Back Stage to give +2000 power is pretty useful throughout the game.

Hope you guys find this article useful in crafting your Fate/stay night series deck. The cards with have previewed are not all the cards that combo with “Caladbolg Ⅱ” . We’ll leave it to you to find out which other cards Resonates with it when the set is out 😛

Stay with us for more previews from the Fate/stay night [Unlimited Blade Works] Vol.2!