Welcome back to the Weiss Schwarz Weekly Column. We have introduced cards from the trial deck in last week’s column. This week, we will be looking at some cards from the booster pack!

Fans of THE IDOLM@STER CINDERELLA GIRLS would know that the idols are being formed into groups. In Weiss Schwarz, the idols will perform better when they are together with their group members as well. Today, we will be looking at this group called “new generations” with Uzuki Shimamura, Mio Honda and Rin Shibuya! These idols have a really awesome combo which requires 3 character cards and 1 climax card. Let’s take a look at the “Brand New Evo! Revo! Generation!” combo! 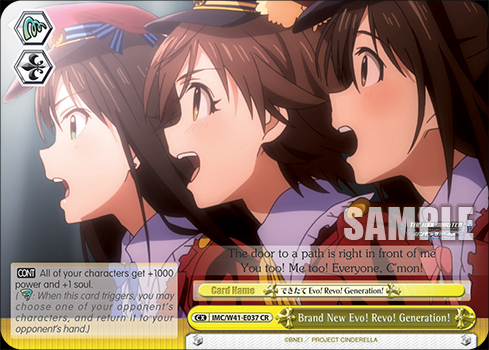 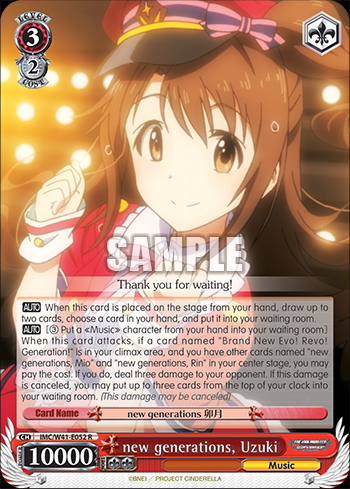 【AUTO】 When this card is placed on the stage from your hand, draw up to two cards, choose a card in your hand, and put it into your waiting room.

This ability will be really useful when you are still missing any of the combo pieces.


【AUTO】[(3) Put a «Music» character from your hand into your waiting room] When this card attacks, if a card named “”Brand New Evo! Revo! Generation!”” is in your climax area, and you have other cards named “”new generations, Mio”” and “”new generations, Rin”” in your center stage, you may pay the cost. If you do, deal three damage to your opponent. If this damage is canceled, you may put up to three cards from the top of your clock into your waiting room. (This damage may be canceled)”

This ability is really monstrous! Your opponent either takes 3 damage or you get to heal 3 damage if he/she cancels! Both effects are in your favour, and will put you at an advantage. 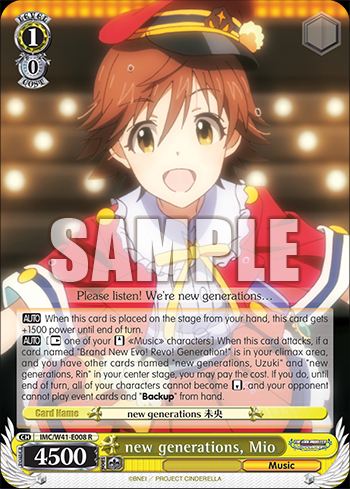 【AUTO】 When this card is placed on the stage from your hand, this card gets +1500 power until end of turn.

“new generations, Mio” only have a base power of 4500, so the +1500 power may be very important for you to defeat your opponent’s character. Use it wisely!


【AUTO】 [【REST】 one of your 【STAND】 «Music» characters] When this card attacks, if a card named “Brand New Evo! Revo! Generation!” is in your climax area, and you have other cards named “new generations, Uzuki” and “new generations, Rin” in your center stage, you may pay the cost. If you do, until end of turn, all of your characters cannot become 【REVERSE】, and your opponent cannot play event cards and “Backup” from hand.

Once you have this ability activated, you can make frontal attack to your opponent without worrying about your character getting reversed! 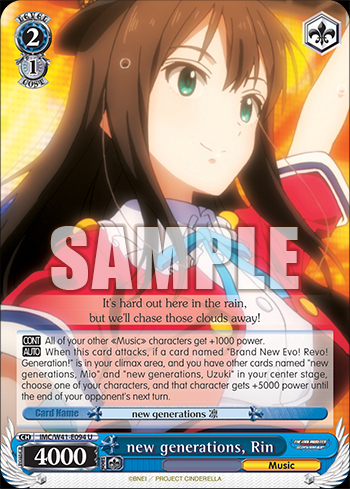 Global power boost to all your «Music» is definitely great, especially when the climax combo requires “new generations, Rin” to be in the center stage.


【AUTO】 When this card attacks, if a card named “”Brand New Evo! Revo! Generation!”” is in your climax area, and you have other cards named “”new generations, Mio”” and “”new generations, Uzuki”” in your center stage, choose one of your characters, and that character gets +5000 power until the end of your opponent’s next turn.”

Gaining +5000 power until the end of your opponent’s next turn gives you a great support on both offense and defense, helping to ensure your characters last for longer so you get more value off them.

If you like this combo a lot, trying playing this event card to make it more powerful!

Choose one of your «Music» characters, and that character gets the following ability until end of turn. “【AUTO】 This ability activates up to one time per turn. When this card’s battle opponent becomes 【REVERSE】, if this card is in the middle position of your center stage, you may 【STAND】 this card.”