Welcome to the Weiss Schwarz Weekly Column! We are back this week for more introduction on the upcoming release of NISEMONOGATARI!

We will be looking at cards featuring the Fire Sisters – Karen Araragi and Tsukihi Araragi! 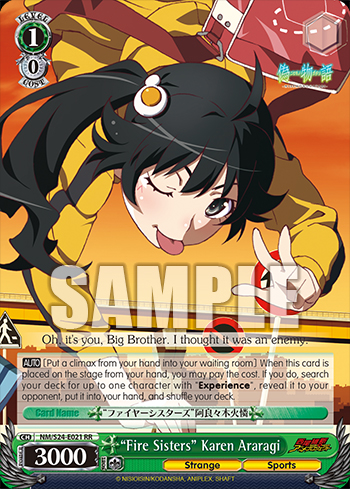 A keyword ability that is featured in many BAKEMONOGATARI and NISEMONOGATARI cards is Experience. Experience is defined in the comprehensive rules as “a collective keyword for an effect which refers to the information of the cards in the level area to resolve an ability, and also a keyword used for abilities that will be active when the card with the ability is in the level area”. The most common type of Experience effects featured in BAKEMONOGATARI and NISEMONOGATARI often check for a minimum combined level of cards in the level area. As long as the number is met, the ability is active and can be used when its other conditions are fulfilled! Experience effects vary widely; sometimes it’s a simple power boost, and other times it may grant powerful abilities.

A card from NISEMONOGATARI that supports this ability is “Fire Sisters” Karen Araragi, which allows the player to search for a card from his or her deck with Experience, all for the cost of discarding 1 climax card from the hand! Depending on what you need and what you have in your hand at that point in time, you can grab cards like Girl Who Was Given a Bee, Karen Araragi from your deck for more power-based beatdown, or use Passionate Personality, Tsukihi Araragi to remove your opponent’s characters from the field. 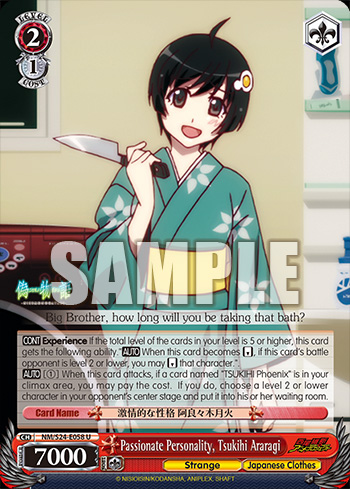 Don’t let Tsukihi’s cute smile distract you from that knife in her hands – she’s not afraid to use it! With the Experience ability fulfilled, this card can gain an effect that allows it to Reverse an opposing level 2 and below character if this card is put to Reverse in battle. In addition, it also has a climax synergy effect that allows you to take down another level 2 or lesser character on your opponent’s 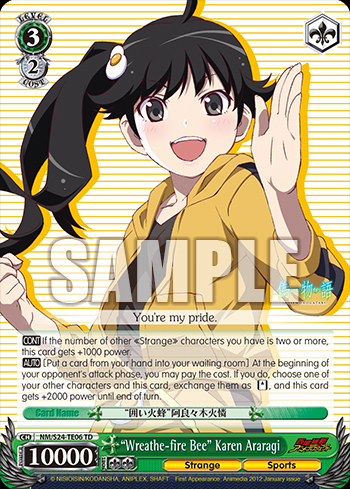 “Wreathe-fire Bee” Karen Araragi is a power-based card that can mess up your opponent’s plans of attack and force him to over commit to an attack. With its ability to exchange places with another card on the field and gain +2000 power and its passive +1000 power from its continuous ability, “Wreathe-fire Bee” Karen Araragi boasts a sizable 13000 power – not counting backrow Support and Backups. Your opponent either has to play around this effect, or risk losing 1-2 characters entirely! With Backups like Cuckoo Girl, Tsukihi Araragi Stalking, you can pressure your opponent on his turn, forcing him to second-guess his decisions at every turn. 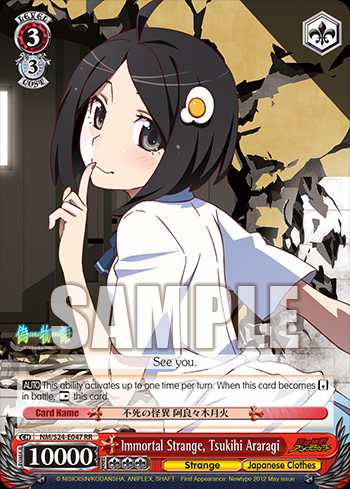 The perfect card to pair with “Wreathe-fire Bee” Karen Araragi, Immortal Strange, Tsukihi Araragi truly embodies the phoenix to revive itself once per turn when it is put to Reverse in battle. Switch card positions around to protect your “Wreathe-fire Bee” Karen Araragi and absorb an attack with this card, while repositioning your Karen to take down another opponent character! This Tsukihi also comes with 3 base Soul, although she costs 3 instead of the usual 2 for level 3 cards.

What better way to talk about the NISEMONOGATARI release than to talk about a character deck featuring the two Fire Sisters? This is a simple deck that focuses on character-name-based synergy, some retrieval, power boosts and an undying level 3 combo! Of course, we haven’t forgotten to include the sisters’ older brother, Koyomi Araragi! Pride of an Elder Brother, Koyomi Araragi offers a field-wide +500 power to all Karen and Tsukihi, while Dislikes Mornings, Koyomi Araragi is a high-power wall with a slight drawback that… basically isn’t a drawback in this deck at all, since every other character in the deck features Karen or Tsukihi!

In next week’s column, we will be looking at the “Change” ability.

An avid card gamer who dabbles a little in every card game he can get his hands on. Considers weakness a sin. Thinks that the weak ones should just go home.