Welcome back to the Weiss Schwarz weekly column! In this week’s column, we’ll be introducing NISEMONOGATARI, the new expansion that is coming out on February 26, ! This set can be used together with BAKEMONOGATARI under the Neo-standard deck construction rulings.

Let’s begin with a few cards from the set! 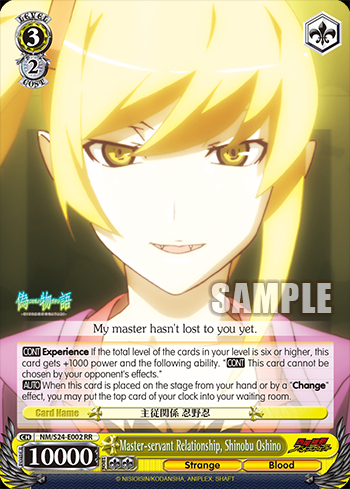 A simple, yet powerful level 3 card, Master-servant Relationship, Shinobu Oshino can enter the field via Change at level 2 and heal 1 damage. This alone makes this card good already, but it also has an Experience effect when the combined card level in your level slot is 6 or more that gives it +1000 power and renders it impervious to targeting effects. This means that after playing it out onto the field via Change, you won’t have to worry about Return triggers sending it back to your hand! Simplicity truly is elegance. 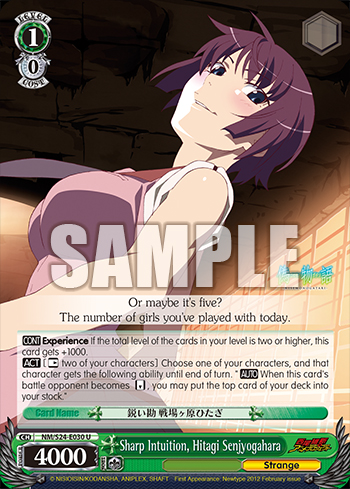 This card’s base power looks a bit low, but its Continuous ability makes up for the difference by giving it +1000 power as long as you fulfil its Experience condition. The key point of this card lies in its second ability, however; it can give another character (or indeed, itself) an ability that allows the player to gain additional stock when that character reverses an opponent in battle. Building stock early is always good, so this card is a must-include if you’re playing a green deck or even if you’re just splashing a few green cards into your deck. 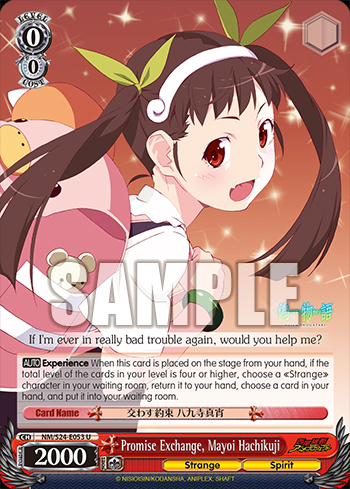 Often, near the end of the mid-game when you are saving resources for the last few turns, you’ll find yourself in a situation where you’re missing just 1 piece of your combo or setup, but don’t have the stock to spare to retrieve it. That is where this card comes in! You can use this effectively at level 2 to add a <

Here is a sample deck list that contains the cards introduced today!

The current trend of decks that are topping tournaments in Japan often play very heavy on level 0 and level 1 cards that have either deck search or retrieval effects, with one or two low-cost, high-powered cards to tide them through until level 2 or so. The decks usually begin playing out level 3s at that point, with a focus on healing damage from the clock and walling off with a high-powered front row.

This deck is no different. At level 0, it uses Big Backpack, Mayoi Hachikuji as its main offensive card as it can remove most threats with ease due to its effect. At level 1, Blessing of the Moon, Shinobu Oshino takes over. During your turn, without other Support effects, it boasts a sizable 6500 power for 0 cost if the Experience ability is active.

The rest of the level 0 and level 1 cards are either powerful Supports like The Way Back, Shinobu Oshino, Criticizing Role, Koyomi Araragi and Family Circumstance, Tsubasa Hanekawa, or cards that offer deck search and retrieval effects like Wandering Girl, Mayoi Hachikuji, Farewell to the Past, Hitagi Senjyogahara and Promise Exchange, Mayoi Hachikuji. We will often find small inclusions that seem… strange… but can impact the outcome of a battle in a big way, such as “Fake” Deishu Kaiki which prevents the opponent from playing events and Backup during one selected character’s battle.

For Backup, this deck runs the standard level 2, +3000 power Backup as well as a special level 1 Backup that, for 2 stock, can reduce the opponent’s Soul by 1. This helps with survivability in the mid- to late-game, where this deck can repeatedly retrieve its key cards to loop Resident of the Shadows, Shinobu Oshino’s Change effect and enter Master-servant Relationship, Shinobu Oshino to begin healing damage at level 2.

The deck lineup rounds out with the staple Suruga Kanbaru and Girl Who Met a Crab, Hitagi Senjyogahara, powerful cards from the first booster that offer field presence, heal, and removal effects.

Stay tuned next week for more introduction on NISEMONOGATARI!

An avid card gamer who dabbles a little in every card game he can get his hands on. Considers weakness a sin. Thinks that the weak ones should just go home.