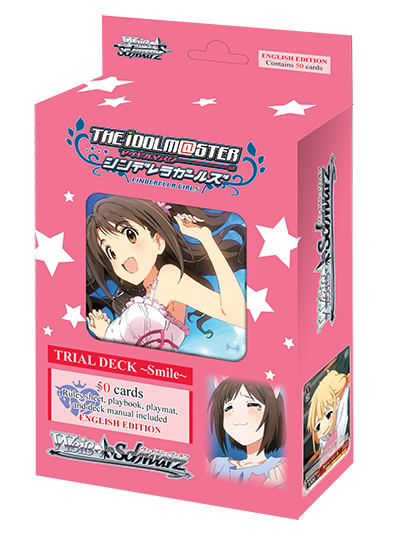 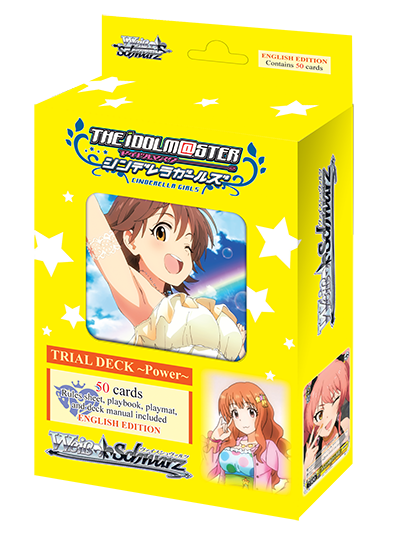 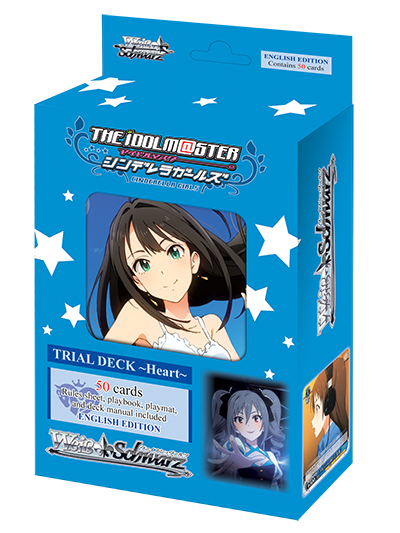 Trial Decks, Booster Pack and Meister Set for THE IDOLM@STER CINDERELLA GIRLS will be released on March 18! This time, we are not releasing one, but THREE trial decks! They are named ~Smile~, ~Power~ and ~Heart~ and features cards of red, yellow and blue color respectively. Remember to check out our PRODUCT PAGE to find out which trial deck your favorite idol is featured in! 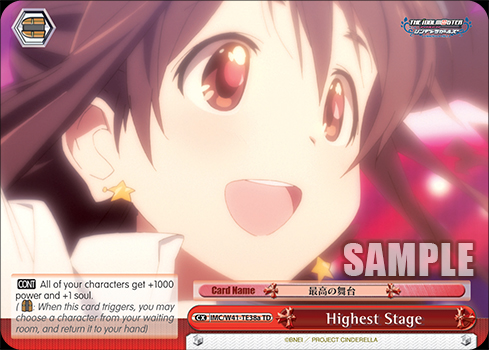 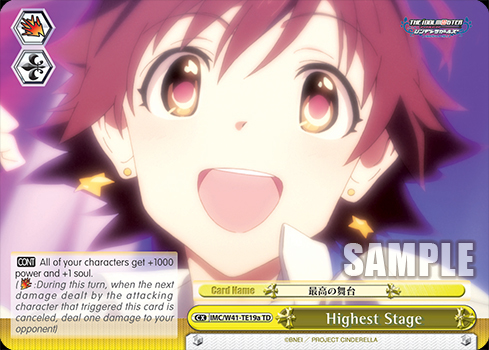 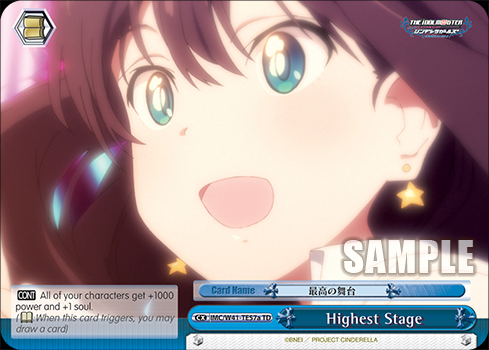 All 3 types of trial deck contain a climax card of the same name – “Highest Stage”, but each of them are different in color and ability. If you are planning to have a mixture of these cards in your deck, remember that you can only have any combination of 4 “Highest Stage” in your deck.

【CONT】 If the number of your other «Music» characters is three or more, this card gets +1000 power.
A base power of 11000 without power boosts from your support character is great! It would be difficult for your opponent to defeat this character if you have support characters on the backstage.

【CONT】 The character facing this card gets -1 soul.
This ability is a double-edged sword but is useful most of the time. Your opponent must have a character with 2 souls or a climax card in order to breakthrough this ability and deal damage to you.

Let’s take a look at the Level 3 characters from the trial decks, as well as some other featured cards.

【AUTO】 [(1)] When a card named “Highest Stage” is placed on your climax area, if this card is in your center stage, you may pay the cost. If you do, choose a 《Music》 character in your waiting room, and put it on any position of your stage.

Uzuki is great at getting characters on the stage. Her climax combo can help replenish characters on your stage quickly at only 1 stock! It works well to enable your 1st ability too!

【AUTO】 When a card named “Highest Stage” is placed on your climax area, if this card is in your center stage, until end of turn, this card gets +3000 power and the following ability. “【AUTO】 This ability activates up to one time per turn. When damage dealt by this card is canceled, you may deal one damage to your opponent.” (This damage may be canceled)

Mio is the expert in battle! Her climax combo gives her the power and ability to gain advantage in battling other characters and dealing damage to the player.

【AUTO】 When a card named “Highest Stage” is placed on your climax area, if this card is in your center stage, you may put the top card of your clock into your waiting room.

Rin will heal up your damage with her climax combo! This ability will be very useful if she is on the stage for a longer time so be sure to protect her well to use the ability more.

【AUTO】 When this card’s battle opponent becomes 【REVERSE】 , choose one of your other red characters, 【REST】 it, and move it to an open position of your back stage.

This ability may look weird to you but it comes in pretty handy during offense. You could conveniently use other character to perform a frontal attack and become 【REVERSE】 to push in more damage, then have this card put it to 【REST】 again. Essentially, it is a “costless” 【ENCORE】.

Global +1000 power for all «Music» characters is definitely awesome considering almost all characters in this set have «Music» traits!


【AUTO】When your character’s trigger check reveals a climax, choose one of your characters, and that character gets +1 soul until end of turn.

This ability is really useful when you are in need to push in a couple more damage for the win.

【AUTO】 When this card attacks, reveal the top card of your deck. If that card is a «Music» character, put it into your hand, choose a card in your hand, and put it into your waiting room. (If it is not, return the revealed card to its original place)

Filtering cards in your hand in the early game is really important to ensure things go smoothly for you in subsequent turns.


【AUTO】 When this card is put into your waiting room from the stage, look at the top card of your deck, and put it on the top or the bottom of your deck.

Pretty good ability to prevent yourself from drawing something you don’t want to in the following turn.