One of the popular Attack on Titan builds among fellow Weiss Schwarz meisters around the world is the <Titan > deck.
Today, we’ll look at the features of a Titan deck. 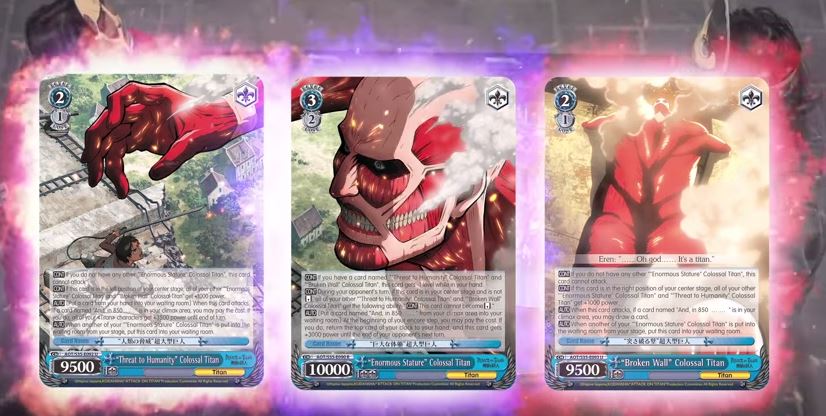 <<Titan >> deck players always begin their game with a very clear objective in their mind.

To build your Almost-Invincible Wall, you would first need to find the correct materials.
Forest of Giant Trees is the best card for you to look for the <<Titan >> card you’ll need, at a slightly “painful” cost. Even if you have the combo pieces in your hand, this card can still get you the necessary support cards to carry on your siege.

Another useful card that can assist you in getting the correct <<Titan >> card is “Towering Threat” Titan.

Your <<Titan >> cards in the center stage have great amount of power,
but do note that 2 of them only have 1 soul!
This means your opponent might outrace you in terms of soul damage even though you have a great wall defending yourself.

“High Intellect” Female Titan is very useful in the race of dealing soul damage.
Make sure you have enough stock and hand to continue the siege!!

The 3-card combo may look very devastating but they are not invincible!
Beware of your opponent’s “Backup” ability which will ruin your formidable combo!
Abilities that can send cards from your stage to another area will break your formation too!
King of Military Rule, Rider and Hope and Acceptance, Homura are very good examples of characters you should be wary of.

Here is a sample deck list for you to test around with.
This was the deck that I had used in BUSHI NAVI International Season 3 Episode 4!